Skip to content
THIS is supposed to be the social media election. But nobody seems to have told the good people of leafy Morningside. On a blustery weekday afternoon in the land of Miss Jean Brodie few voters seem particularly au fait with the latest Twitter stramash. “I’ve not heard anything about that,” nurse Zoe Gornal, 27, says shaking her head when I ask what she thinks of tweets sent by Edinburgh South SNP candidate Neil Hay about “non Scots accents” on TV and elderly voters who can exercise their franchise “but barely know their name”.Linda, 60, looks bemused when I mention the word “Quisling”, which appeared in the headline of a spoof news piece that Hay also tweeted from a pseudonymous account in 2012. A rather tortured couple of minutes follow. “It basically means a traitor,” I say. Blank look. “It’s from Norway originally.” Another blank look. “I’m SNP,” Linda says firmly. “I want independence and they are the only ones who will get it.”Not everyone is quite as blasé about Hay’s online activities. My formal requests for an interview are turned down. Undeterred, I try tweeting Hay, but he seems to have gone quiet on social media of late.

Nicola Sturgeon has, however, been less reticent on the question of her candidate’s Twitter alter ego. “I do condemn the language used and I condemn the comments made – as I always do when anybody steps out of line on Twitter, on Facebook or any medium,” the First Minister said last week.

“Neil Hay has rightly apologised. I think, given that we face an election two weeks today, it’s now up to the voters to decide.”

The storm in a Tweetdeck threatens to overshadow the fascinating contest that is brewing in Edinburgh South. This is one of the most marginal seats in Scotland. In 2010, Labour’s Ian Murray won by just 316 votes, from the Liberal Democrats. The SNP finished a distant fourth.

No prizes for guessing the current state of play. An Ashcroft poll two weeks ago put Labour six points behind the SNP. The Conservatives – who held the seat for almost 70 years before Michael Ancram was unceremoniously deposed in 1987 – were on 15 per cent, with the LibDems’ paper candidate limping home on just 6 per cent.

The good Lord’s polling has been a central feature of this election campaign, pointing to unprecedented shifts in support to the SNP in the most unlikely of places. But buried among the banks of figures, the Ashcroft polls also carry write-ups of focus groups with voters in various Scottish constituencies. These, if anything, are more fascinating than the headline-grabbing numbers. Many participants tell Ashcroft’s pollsters that they like their Labour MP. (“A very, very good local MP”, is the kind of phrase that recurs.) But they are still going to vote SNP.

That seems to be the central problem facing Murray. Before we meet in a chi-chi hotel bar overlooking Bruntsfield links, I phone a couple of friends who live in the constituency I once called home. “He’s a really good local MP” (that phrase again) says one. “So you’ll be voting for him?” “Oh, no. I’m voting for Neil Hay.”

When I lived here, my old amigo was a card-carrying Labour Party member. He voted No in September.

Murray is the kind of local MP many of us would be happy to have. He comes across as diligent, approachable, and hard-working. Raised in the Wester Hailes scheme, his mother was a cleaner, his father died when he was just nine: “We were just a very working-class family. That’s where my politics come from.” Murray’s life since has been more rarified – a degree in social policy and law from Edinburgh University, a successful management company, a council seat followed not long after by the nod for Westminster – but he has always maintained close links to the area. He was at the forefront of the campaign that transformed Hearts from a football club on the brink of extinction to a model of how a community businesses can thrive.

That Murray faces a battle to hang on to his seat is yet more evidence of the sea change in Scottish politics. In September, Edinburgh South voted by an overwhelming margin to stay part of the union. Now, in an effort to sway swithering voters, Murray is trumpeting his anti-Trident credentials. “I would not support the renewal of Trident. I would not vote to support it,” he tells.

“We need to transform our narrative,” Murray says quite candidly.

And what of those tweets from his SNP opponent? “Some of the things he has said suggest he might not represent everyone here regardless of how they vote”, says Murray, who stops short of calling for him to stand down.

Hay, for his part, has apologised for the missives, which were sent from an account named Paco McSheepie in 2012. “The words in these old tweets were poorly chosen, and I apologise for any offence caused. They are not in keeping with the way I would express myself now,” the SNP candidate told the Edinburgh Evening News recently. 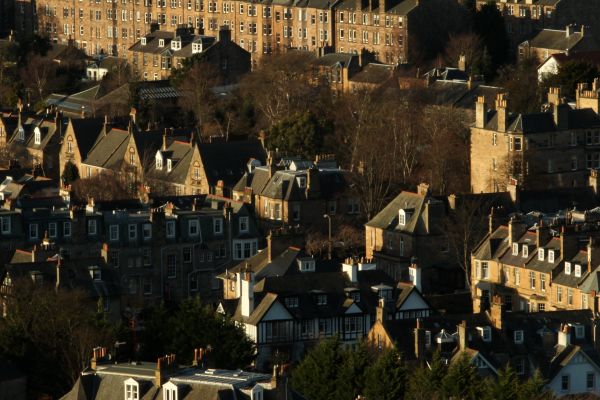 But are would-be constituents really concerned about Hay’s Twitterstorm? Beyond the social media echo chamber is anybody really listening? Murray says he has received emails and comments on doorsteps, but Scottish Socialist candidate Colin Fox believes voters in Edinburgh South are not going to be swayed by 140 errant characters. “It’s only going to influence those people who weren’t going to vote SNP in the first place,” the former MSP says.

Edinburgh South is often caricatured as the epitome of stolid middle-class affluence, home to JK Rowling and Edinburgh University, but some of the country’s most deprived areas lie within its boundaries, too. “It is a microcosm of Scotland,” says Fox. “65 per cent of the constituency lives in big working-class schemes. Labour’s support there is haemorrhaging.”

Not far from one of those schemes, Inch Park, a Yes café has sprung up in a former Indian takeaway by the side of a busy road. Cars whizz by outside, almost shaking the “Hope Over Fear” Saltire flag off the wall. It feels a bit like a cross between a truckers’ stop and a community centre for the mainly older people who sit drinking cups of tea. A table sells Scotland car flags and copies of books by Stephen Maxwell and Gerry Hassan.

“I’ve got a 10-year lease,” says Mike Blackshaw, the moving spirit behind the café. A larger than life character with a sharp sense of humour, honed over decades on the cricket pitch, Blackshaw is originally from Grantham, home of one Margaret Thatcher (“I did shop in her father’s shop. Her mother was a gem. He father was awful.”). At 18, not long after moving to Scotland, he joined the SNP. That was 48 years ago.

On the café whiteboard is an exhortation based on the latest polling: “Only 3 per cent ahead. Maximum effort required.” Blackshaw is confident that Hay will emerge victorious despite his recent travails. “We’ve canvassed a lot of people since Neil’s things in the papers. We have only had two or three comments and two of those took posters,” he says.

At a nearby table, Pat, 66, is enjoying a slice of homemade chocolate cake.

She “got so politically motivated during the referendum that I didn’t know what to do with myself.” She comes to the café twice a week, a 25-minute journey in her mobility scooter.

Across the room, Gordon Wright, 73, complains that the local papers have been “hammering Neil”. “But it might have the very opposite effect. It might make people feel sympathy for him.”

An SNP man for 55 years, Wright is the man who took the famous photo of the 11 newly-elected Nationalist MPs standing outside the Caledonian Hotel in Edinburgh in 1974. That remains the SNP’s best Westminster showing – well, at least for the next week.

Back on Morningside Road, the fabled ladies who lunch are “fed up” with all the talk of politics. “I’ve had enough of it,” says one woman as she browses the rails of scarves in Meander. Her friend agrees.

Both are “not Labour” but they are worried about the prospect of another independence referendum.

Owner Julie Brechin is more sanguine: “We’re feeling more enthused. There was a real bounce from the referendum and that has carried through to the general election. People are more knowledgeable and more comfortable talking about politics.” What about Ian Murray? “He’s a good guy”.

I feel like I barely need to ask what way she will be voting, but I do anyway. SNP. I ask about Neil Hay’s tweets. Another blank face.