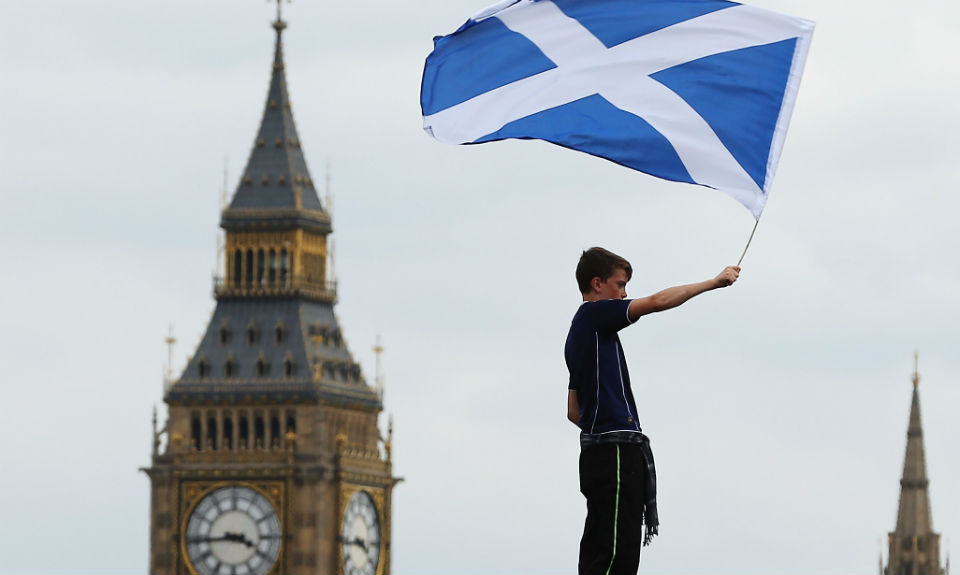 INVERNESS, Scotland — Last September, Scotland held a referendum on independence from the United Kingdom. The campaign was lively, colorful and, it seemed, decisive: Scots voted by a 10-point margin to stay a part of Britain. But just seven months later, another nationalist earthquake looks set to hit Scotland, shaking the foundations of British politics and even the union itself.

On a pedestrian street in the heart of Inverness, the largest city in the Scottish Highlands, a small shop shows the extent to which the independence movement is still alive in many hearts and minds — and, soon, ballot boxes. The “Yes shop,” as it’s known, is still selling badges, key rings, and even dog neckerchiefs bearing the blue-and-white “Yes” to independence logo. Basque and Catalan flags (fellow long-sufferers) hang in solidarity with the St. Andrew’s Cross on the wall. The foldout tables that run along one side of the store are stacked with posters and election leaflets for the pro-independence Scottish National Party (SNP). On a recent weekday at lunchtime, the store was packed with volunteers and activists.

“People sometimes come in with their children,” said Norman Will, the force behind the shop. “In cold weather people bring in soup and stovies [a Scottish dish made with meat and potatoes]. We have collections for the local food bank and political discussions.”

The SNP may have lost last September’s referendum but it’s emerged energized as Britain gears up for a big, national election. Indeed, the party’s new leader, Nicola Sturgeon, is just about the only popular politician in the country. Despite holding power in the devolved Scottish Parliament for eight years, the nationalists have profited from a disenchantment with established parties that persists across Europe. And now the SNP is poised to translate that frustration into political power.

Such an unprecedented result would have ramifications far beyond the corridors of Westminster. The SNP surge would virtually wipe out Scottish Labour, which has won every Westminster election in Scotland since 1955. The rise of Scottish nationalism greatly increases the likelihood of a hung Parliament, too, but even more significantly it has put the question of Scottish independence — and the future of the union — front and center once more.

Since the referendum, SNP membership has quadrupled to over 100,000, making the nationalists Britain’s third-largest party, despite the fact that Scotland has only around one-twelfth of the U.K.’s total population. Among the SNP’s new supporters is Ciarn MacFhionnlaigh. The 32-year-old supermarket worker has become a regular visitor to the Inverness “Yes” shop. The referendum “was amazing,” he told me. On May 7 he will vote for the SNP, in part because he wants another referendum on independence, but he also believes that the party is best placed to “stand up” for Scotland at Westminster.

Inverness, a small, picturesque city popular with tourists setting out to explore the Highlands isn’t historically a stronghold for Scottish nationalists. The Highlands voted against independence in September, and the SNP received less than one-fifth of the votes cast here in 2010. But polls put SNP candidate Drew Hendry well ahead of the incumbent, Danny Alexander of the Liberal Democrats. Alexander, who has been the second highest-ranking official at the Treasury for the past five years, is one of the most recognizable faces in Scottish politics. His profile, however, might not save his seat.

Such unlikely electoral challenges are being repeated across Scotland. The Labour Party, in opposition in London for the last five years, have long dominated Scottish politics. Labour currently holds 40 of Scotland’s 59 seats in Westminster. But the nationalist tsunami now threatens every Labour constituency in Scotland, potentially robbing Labour leader Ed Miliband of seats he would need to form a majority government after May 7.

The town of Paisley, seven miles southwest of Glasgow, is illustrative of the scale of the challenge facing Labour. A once prosperous industrial town whose Victorian grandeur has faded since the textile mills started closing in the 1960s, Paisley has been rock solid Labour territory for decades. The party has won every general election contest here since the end of World War II, often without much of a fight.

Paisley’s MP is Douglas Alexander, a well-respected former Scottish secretary under Tony Blair and the current shadow foreign secretary. Last time out, Alexander won just short of 60 percent of the vote. Now he is trailing Mhairi Black, a 20-year-old politics student with no political experience.

“I think this constituency is quite representative of what is happening across Scotland right now,” Black told me. “What we witnessed during the referendum was a political awakening across the country. It was always going to be the case that the general election was going to be different.”

Labour’s popularity in Scotland has plummeted after joining forces with the politically toxic Conservatives to campaign against the independence referendum. Around 180,000 Labour supporters voted “yes” last September and many of them are now expected to switch their allegiances to the SNP in the general election. Labour is now on the defensive: The party has withdrawn resources from some seats in order to concentrate on Glasgow and the West of Scotland. “I’m set to Defcon fucked,” a sitting Labour MP from Scotland recently said.
While Labour comfortably won every Westminster election, the party’s standing in the Scottish Parliament has fallen steadily over the last 15 years. In 1999, Labour secured 53 of 73 seats. The party won just 11 seats in 2011. At the same time, the SNP’s share in the Scottish Parliament continued to rise. Now Scottish voters seem set to repeat their devolved preferences in a Westminster election for the first time, which could produce a nationalist landslide under the U.K.’s first-past-the-post system.

Labour has failed to appreciate that most Scots actually like the SNP, said Gerry Hassan, a research fellow at the University of the West of Scotland and author of The Strange Death of Labour Scotland. “Ever since the modern SNP was created, around 1974, opinion polls have shown that Scottish people have a positive view of the SNP. They think the SNP stand up for Scotland’s interests. The Labour Party doesn’t understand that.”

Under Sturgeon, who took over as the party’s leader last November, the SNP has tacked leftwards, directly appealing to disgruntled Labour voters who increasingly see little difference between the party of their grandfathers and the Conservatives. At a recent event in Edinburgh launching the SNP manifesto, Sturgeon promised to “end austerity,” by increasing government spending by 0.5 percent a year. The SNP’s manifesto backs a 50 percent top tax rate, an extra tax on homes worth over £2 million, new levies on bankers’ bonuses, an increase in the minimum wage, and formal recognition of Palestinian statehood.

The SNP has ruled out joining a formal coalition with Labour as long as Miliband’s party continues to support the Trident nuclear submarine program, which is housed near Glasgow. But Sturgeon has called for a looser “progressive alliance” with Labour to keep the Conservatives out of office. Meanwhile, Labour, wary of losing English voters, has insisted that there will be “no deal” with the SNP. Such obdurateness might play well in London but it is doing Labour no favors in the Scottish heartlands. Critics have accused both Labour and, particularly, Conservatives of alienating Scottish voters by demonizing the SNP.

The post-election arithmetic in Britain looks increasingly complicated. Every poll suggests there will be no clear winner, which makes a Labour deal with the SNP more likely. The Conservatives — sensing an opportunity to make gains from Labour in up-for-grabs English constituencies where Scottish nationalism is looked upon with disdain — have decried any deal with the SNP. Home Secretary Theresa May even said an arrangement with the nationalists would spark the worst constitutional crisis since the abdication of King Edward VIII in 1936.

Even if the SNP was invited into a coalition with Labour, the Scottish party might have good reason not to join. The SNP’s primary focus remains on Scotland, in particular the 2016 elections for the Scottish Parliament. The party is unlikely to want ministerial seats in London, which would make the task of differentiating themselves from Labour more difficult next year. At the same time, the SNP are wary of facilitating the formation of another Conservative-led government by failing to support Labour. “The SNP can’t sign a blank check to Labour, but they can’t be seen to bring a Labour government down so they have to play a very careful hand,” said Hassan.

The SNP’s record-high poll ratings have fueled speculation that Sturgeon would like to hold a second vote on independence. In order for that to happen, the party would need another majority in Edinburgh next year. But that’s still a long way off. The SNP will not go to the polls again until they know they can win, said Paul Cairney, professor of politics at the University of Stirling.

“The SNP won’t win enough votes [in the general election] if they look like the independence party and nothing more,” said Cairney. “And they have dealt with that problem well. Long-term referendum chances hinge on them remaining a credible party of government in Scotland and, for now, a positive force in the U.K.”

Nonetheless, pro-independence sentiment remains energized ahead of the election. In the “Yes” shop in Inverness, Emma Roddick, a 17-year-old student, said she has “lost count” of the number of hours she has spent making pro-independence badges and pins. She is too young to vote but has no doubts about Scotland’s political destiny.